Servoflo distributes a variety of capacitive and resistive humidity sensors for medical, HVAC, instrumentation, critical containment and other applications.  Some situations need precise and highly accuracy relative humidity (rH) measurement to maintain narrow, specific environmental conditions while others have a broad temperature range with wider tolerance ranges for rH measurement. This blog post explains the differences between capacitive and resistive relative humidity sensors and why to choose one type over the other.

Humidity and dew sensors, also called hygrometers, are necessary when consistent environmental conditions are required to be maintained.  A capacitive humidity sensor is so named because it uses capacitive measurement, which relies on electrical capacitance. These are a common type of humidity sensors.

The capacitive sensor is composed of two metal plates, or electrodes, separated by a thin layer of non-conductive polymer film.  The film attracts moisture from the air and when the moisture makes contact with the metal plates it creates a voltage change.  The output voltage measurement is captured and can be displayed via an analog dial, output into another system, or converted into a digital reading that indicates the amount of moisture in the air.

The capacitive sensor is contained in a hygrometer to measure relative humidity. The sensor is one part of the system that also contains a probe, cable, electronics, and an output signal.  Together they function to accurately measure the entire humidity range from 0% to 100%.

Resistive sensors work on a similar principle to capacitive sensors, where electrical change is measured to produce a value for relative humidity. However, the mechanism in this system is different. Although resistive sensors use a hygroscopic (moisture-absorbing) material similar to the capacitive system, the difference is that the measurement is of the resistance change in the material rather than the capacitance.

In this case, the output voltage has an inverse exponential relationship to relative humidity. As with capacitive sensors, the data regarding the output voltage can be captured, stored, or converted. These sensors use cost-effective, scalable dielectrophoresis, in which a free-standing structure is created to house pre-patterned electrodes that are separated by a single crystalline zinc oxide nanowire (ZnO NWs).

Although the capacitive sensor and resistive sensor have the same goal in measuring humidity, they differ in their methods.  Capacitive sensors are considered to be more accurate and stable while producing repeatable results—however, their cost can be prohibitive, making them more suitable for medical type applications where precision is paramount.  The less expensive resistive sensors are more practical for situations where frequent measurements are taken that do not require extremely precise data.

For more detailed information about selecting a humidity sensor and the applications and industries these are frequently used in, download our eBook.  You can check out our full line of digital humidity sensors on our website here. 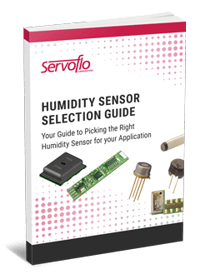